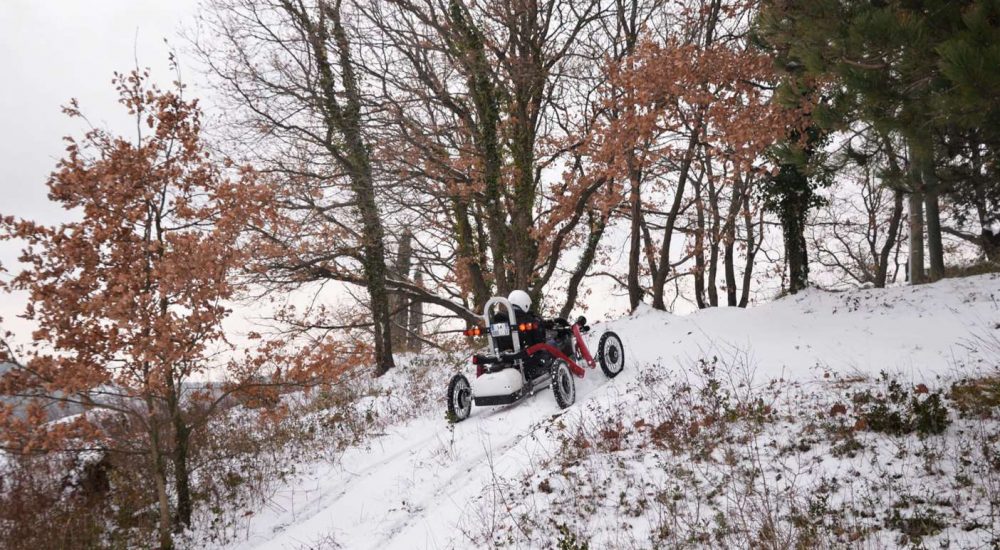 Let’s not beat about the bush, this Swincar looks like an unfinished school project. However, it also turns what sounds like the product of a child’s imagination – a cross between a car and a spider – into a real, working reality. 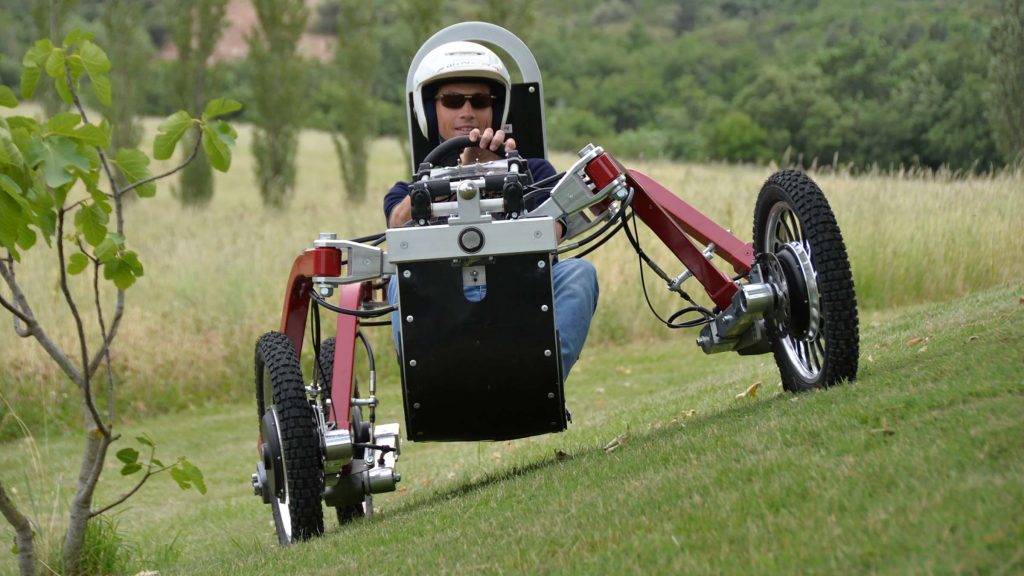 It is the brainchild of French inventors Pascal Rambaud and Jerome Arsac and has taken eight years to turn from sketch into a production reality. Now, in the project’s latest development Pocket Classics has secured the exclusive rights to distribute the Swincar in the UK, complementing its existing range of highly detailed, motorised ride-on toy cars.

Initial sales effort is being directed towards off-road activity centres, where the Swincar’s unique driving experience is sure to appeal. It is at one of these (Quadrenalin near Milton Keynes) that I rendezvous with Pocket Classics managing director James Cooper and the first Swincar E-Spider – to give it its full name – in the UK.

The E-Spider is not road legal (with a top speed of 18mph you’d be mad to want to drive it on the road anyway), so James transports it in the back of a Transit. As it rolls down the ramps it is immediately apparent that the aluminium frame and long spider-like arms look even more bizarre in real life than the pictures suggest. It’s small (total length is just two metres and it sits only 22cm off the ground), weighs just 200kg and is clearly well finished, but looks about as comfortable as a wet bike ride. And that’s before you encounter any mud…

I don overalls, drop into the single seat and place my shoes on the adjustable footbar. James flicks a couple of switches and a little digital instrument pod attached to the steering wheel blinks into life. “That’s it,” he says. “You’re ready.” Oh yes, I forgot to mention the Swincar is fully electric and thus the only noise you hear is of the trial-bike sourced tyres padding across the landscape.

Acceleration (via a thumb throttle) feels instant, but there’s also decent progression and an awful lot of regenerative braking which makes it easy to control your speed. So easy in fact, that the conventional brakes aren’t really needed. Good thing too, because the hand-operated hydraulic disk setup is not terribly effective when you’re tackling the kind of slopes the Swincar is capable of.

Ultimately it’s this level of capability that defines the E-Spider; it really can go through and over obstacles that you just don’t expect. Swincar says that it can ultimately ascend and descend hills up to 70 degrees, as well as drive along the side of a 50-degree slope. Riding in the vehicle this all feels remarkably calm and comfortable, not least when you see what the Swincar looks like from the outside. This is due to the way its four articulated suspension arms work completely independent of one another and are fixed to the chassis well above the driver’s centre of mass so that you dangle in the cockpit at what is always a relatively level angle regardless of what the wheels are doing. Four-wheel-steering provides a good turning circle but requires strong arms.

The 4kWh lithium-ion battery gives a range of about four hours between two-hour recharges. It is mounted in the floor and sends power to four 1kW hub-mounted brushless electric motors, giving the E-Spider permanent four-wheel drive. What’s more, because the suspension arms allow each wheel to always be in contact with the ground you can get to and through all sorts of terrain.

Admittedly, a quad bike will do much of this for a significantly lower price than the £13,495 Pocket Classics is charging for a Swincar, but with vehicles like this, it’s as much about the experience as it is ultimate capability. And sitting in that bucket seat, tackling the ruts and troughs of the course without so much as a jolt or a bump felt through my body and all in near silence, it’s hard not to conclude that the experience here is indeed unique.

If initial positive response from off-road centres such as Quadrenalin is anything to go by you’ll start seeing a few more Swincars in recreational use soon enough. However, its inventors also believe there’s potential for agricultural and military applications, and that the eerily smooth ride could open up off-roading to people with mobility problems.

Bottom line is, while you might mock the E-Spider’s appearance don’t for a second try pretending you wouldn’t love to give it a try.

Instagram did not return a 200.
Scroll to top
WhatsApp us