At first glance, the Swincar E-Spider doesn’t exactly scream extreme off-road capability. The narrow body, exposed frame and spindly wheels giving it the ungainly appearance of a lifesize Meccano kart. But don’t judge the book by its cover and all that, because the genius of the Swincar lies in its simplicity 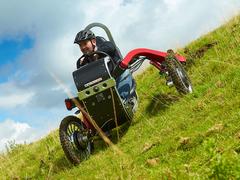 The brainchild of Pascal Rambaud, founder of French engineering firm Mecanroc, the E-Spider is driven from within a cradle, suspended between the four articulated ‘legs’ to which its wheels are attached. This layout means that through a corner, or on an incline, it naturally leans, maintaining stability whilst keeping all four wheels in contact with the ground. Over rougher terrain, the entire thing splays out – like, say, a spider perhaps – the driver, batteries and controls remaining perfectly balanced in the middle as each wheel goes in search of equilibrium.

Top speed is 30km/h – which is about as fast as you’d want to go, to be honest – with power coming from in-hub, 1,000-watt, brushless electric motors. These drive each wheel independently and have plenty of torque on tap, making them ideal for an all-terrain vehicle like this. “Ah, but you’ll only be able to go as far as the extension cord lets you!” the Luddites will sneer. Well, there’s yet another trick up the E-Spider’s sleeve. The lithium-ion batteries housed in the sled-like base offer four hours of run time from a two-hour charge and that range can be extended further still, thanks to energy recovered through regenerative braking.

Although not silent, the whirring of those electric motors whilst under power is also far preferable to the serenity shattering rumble of a quad bike’s ICE. They’re quiet enough in fact to allow you to enjoy the sounds of the countryside you’re traversing; the tweeting of the birds and the wind through the trees, as well as the squelching of mud and sploshing of puddles beneath the tyres. It’s an experience of near visceral tranquility, if you will. 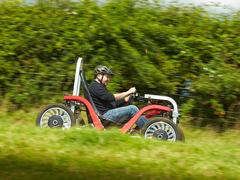 It can do 30km/h, which feels more than enough!

While the four-wheel steering makes for remarkable agility, it can’t do anything to remedy the vaguity with which your inputs are executed. With the wheels constantly changing location on you it’s nigh on impossible to judge precisely where you’re placing the Swincar on rough ground. No matter though, because whatever they end up encountering, they overcome. That on demand torque and four-wheel drive kept it crawling forward no matter what as it conquered the entire quad bike course we tested it on without breaking a sweat – this despite the insistence of the owner that it wouldn’t get past the first obstacle. Still, you wouldn’t want to take it near any precipitous drops…

Now for the elephant in the room. The Swincar has an RRP of £13,495. Yes, that’s a lot, but with deals for bulk orders, the kind of commercial venues that will run them will easily justify the cost. That’s almost besides the point though, because the E-Spider is noteworthy for its simplicity, ingenuity and above all, its tremendous fun. The potential of the design to be improved, scaled up and revised for other applications is definitely interesting too. In short, it’s certainly not just a toy for the one per cent – though if you can afford one, you should definitely give it a go.

Instagram did not return a 200.
Scroll to top
WhatsApp us